So we got complains from malaysia that our US servers where slow; well here are the hard facts, we did fly to Kuala Lumpur, did get us a TM.NET.MY ADSL line and started testing. What we discovered is absolutely traceable for all parties and can be done by each malaysian to show tm.net.my that they make a big mess of things. Malaysia, your broadband does not need to be slow, this is clearly bad management from your provider.

We start with some speedtest.net results; including some very funny and strange speeds; lets start with Kuala Lumpur.

First of all, the download speed is LOW, second of all the ping gets 93ms (and that is decent if we compare with some other test we did before where pings where even getting above 200ms).. Truth is, this should not be more as 15 to 20ms for the distance traveled.

Let’s go on… Some international testing …

What about Singapore, we know that a lot of Malay connection go over Singapore.

ahhhh that looks more like it ? 79ms, hey thats faster as the local server, maybe local peering is bad, or the test server is stressed to much, or tm.net.my doesnt want us to use it for tests. It doesn’t matter, we have more locations to test from.

Okay, speed drops a bit, but the pings are still reasonable, lets move outside to the US, as we know the USA has about the most servers most of us want to visit, so that should be fast right ?  Let mewith Clifton, New Jersey.

Ok, move to dallas, TX see what is happening there.

Hmmm Ping gets better, speed still slow, but hey it has about the same speed as the local server.  Lets move to West coast USA. What about San Jose, CA ?

Okay, Terrible speed as well, what is we move to Germany ? twice as far as the US from here. Let’s test Frankfurt.

Okay, i admit, i am a bit jet-lagged took a cold shower, washed my face, cleaned my eyes, did wonder if i needed glasses, but now, what i saw was right, a ping which is half of the USA servers, and a speed faster as to Singapore. What is going on here ? Did our earth change when i was in the plane and is Germany now located next to Malaysia ? Must be our lucky shot, let’s try some more European locations.  What about Amsterdam, The Netherlands

Okay the ping did go up, but watch the speed, yeah, thats what they sold me when i bought the tm.net.my package, thats what i expect to get to servers in the USA as well. How come that a location twice as far as the US is receiving these speeds, okay i hear you, you say the distance on speedtest.net is lower, well, i will help you out of that dream that is the shortest route between point A and point B geographicly, not the actual millage of submarine cables, most connections to Europe will go over the US (some exceptions are there) but then they need to move through the middle east towards Europe and thats not a straight line as the speedtest.net indicator is showing.

One more, Paris, France… France is not known for very good international bandwidth so lets see. 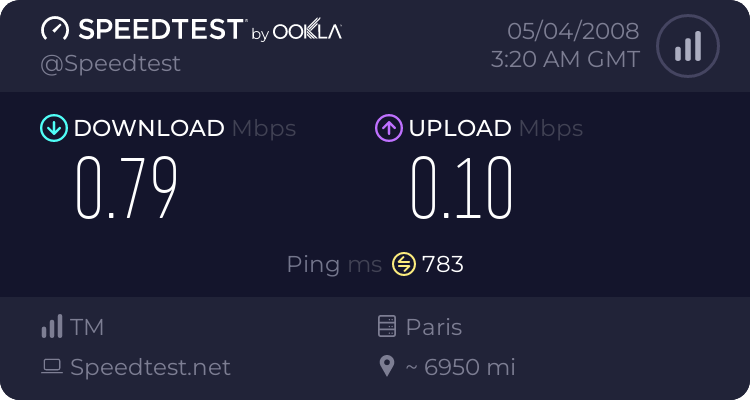 Okay as expected the speed is slower, but still far better as any US location. I start wondering about the UK, most POPs of international carriers are located in the UK to make the dive over the big pond towards the US.

Ah better again, so … what is the deal with Germany, why are speeds on its best towards that location, and why does tm.net.my seem to boycott USA servers, has this political reasons, or is tm.net.my not able to set up international peering with the bigger parties ? or are there other reasons ?

If you work for TM please let us know, we are willing to listen to your side of the story, but the facts are there. The truth has been told, now it is up to Telekom Malaysia to fix their issues.

p/s if you are a Malaysian reading this, we are very sorry for the slow loads, please complain to your hosting provider, it is really only their fault.

My Frustrations, My Internet, My Life, My News
7ads6x98y